This is one of Gizmo’s favorite homemade toys. It’s just a crushed paper bag with old spearmint tea bags inside. She treats the spearmint in this toy like it’s catnip, because both catnip and spearmint are part of the mint family. We’ve found that these toys are great enrichment for her, especially since she doesn’t like playing when the other cats are around.

Gizmo was 13 years old when this was taken, and now she’s 14. She still loves these homemade toys. If you’d like to try a toy like this, it’s easy. All you need are brown paper lunch bags, and dried catnip, mint, spearmint, or even pumpkin spice. You could even try valerian root, since some cats respond to that as well. These are great ways to make a variety of toys for your cat that are fun, cheap and replaceable.

Kali and Chase were bottle babies, so they were taken from their mother way too early. As such, there are some behaviors they never grew out of: Wool sucking, and kneading. Cat behaviorists believe that kittens need to be with their mothers until about 12 weeks of age, rather than the usual six to eight weeks. This could be why we have so many cats that engage in wool sucking.

It may also be why cats knead on pillows, blankets, your stomach, and whatever else that might remind them of their mothers’ bellies. When Kali does it, she very gently touches her muzzle to whatever it is she’s kneading on. It’s usually either one of us, or her favorite pillow, like in the video below:

The fact that she was a bottle baby explains a lot of her kneading behavior. She didn’t have her mother to teach her, and wean here. She had us, and she thinks that we’re her mama. PetMD concurs that her kneading very well may signal that she’s “a kid at heart.” Nursing kittens instinctively knead on their mothers’ bellies to stimulate milk production. They knead before they learn to walk, before they learn anything other than nursing.

Another reason for the kneading behavior is affection. You might have noticed that your cat flexes her paws on your lap when she’s relaxed, content, and purring. PetMD says that kneading and flexing can be one way our cats tell us they love us and they’re happy. Unfortunately, it can hurt, since the happier they are, the harder they knead.

Kneading behavior in the wild

There’s also the possibility that your cat kneads because she’s softening up her nest. Our cats’ ancestors liked to make sure their nests were soft and comfortable, either to sleep or to give birth. Kneading down tall grass was a way of making a safe, warm, comfortable nest, and also allowed her to check the area for potential hazards and hidden enemies. If your cat’s favorite time and place to knead is in her usual sleeping spot, it’s entirely likely that’s what she’s doing.

The only real problem with kneading is her claws, so if she’s tearing up pillows and blankets, or your clothes, train her to use old blankets and clothes for her beds, instead of your good things. But kneading behavior itself is normal, affectionate, and basically kitten behavior. Treasure it.

Have you ever wanted to make your own cat food, but didn’t know how? My husband and I have been feeding our cats a raw food diet for a little END_OF_DOCUMENT_TOKEN_TO_BE_REPLACED

This is something that Chase only does when he’s hungry, and sometimes he’s very insistent about it. I suspect it’s similar to wool sucking behavior, because sometimes he kneads while doing this, too. He’s not actually gnawing, per se, and it doesn’t hurt. He presses the corner of his mouth against my knuckles and…it’s more like gnashing his teeth, I suppose. Has anybody ever seen anything like this before? Do your cats ever do this?

What do playful cats look like from underneath? At least here, we can get a glimpse of paws, pads and toes. This is a unique perspective on how Chase, here, holds his paws, and how quickly he swipes and bats, during his interactive playtime. His current favorite toy is a stuffed mouse attached to an elastic string on the end of a stick.

Since taking this video, we’ve had to attach a new mousie to the string, because he finally tore the old one apart enough that I was getting worried about him swallowing pieces of it. The last time he swallowed a piece of a toy, he needed emergency surgery, so we’re really careful about making sure he can’t swallow anything.

Both Chase and Kali were feral kittens; they came to us at only three weeks of age. Despite the fact that they never knew the life of a feral, they’re both a little more “wild” than our other two cats, Gizmo and Aria. We’re not sure why this is, because they’ve been indoors since they were rescued, but it is what it is. 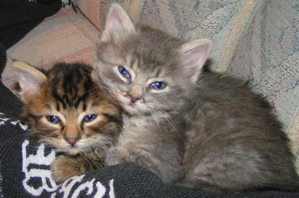 This is especially true for Chase. When he doesn’t get some good interactive playtime, he actually starts pawing at the knob on the back door, and mewing plaintively. He’ll stalk through the house, looking for things to bat around, and try to satisfy his instincts on his own, which doesn’t work too well. We’ve noticed that there’s always a marked improvement in his mood and behavior when we make sure to play with him regularly.

Of course, all four of our cats need their interactive playtime, and we can’t effectively play with Chase by himself. So all four cats get to play, too, as they want.

Sometimes, cats can amuse themselves okay with their own toys, but they really do best when you’re around and can make their toy move the way their prey might, in the wild. Keeping their prey instincts satisfied is one way to keep cats, particularly indoor-only cats, satisfied.

When it comes to interactive playtime, one of the most important things you can do is make sure your cat is successful. Make him run after his toy, and jump for it, and chase it, yes, but also let him catch it. According to Cat Behavior Associates, interactive playtime includes both physical and mental stimulation. If your cat never catches his toy, it becomes just frustrating physical exertion, and he may not get excited about playing.

Also, at the end, start winding the action down so your cat can start relaxing and calming down. Don’t end interactive playtime suddenly, because he’ll have all this pent-up energy that suddenly has no release. Cat Behavior Associates says the best way to think of it is as a cool-down, the way you would after your own workout.

What happens when you want to catch a video of your cat doing something specific, and you have a prima donna in the house? You get a videobomb. I was trying to catch Kali doing the sideways dance, as she sometimes does when she’s amusing herself. However, Chase decided that he would rather investigate the camera, and steal whatever glory his sister was getting, than let me continue to film her.

Some cats chase their tails. This is Gizmo, chasing her own tail. When I took this video, she was 13 years old. One year later, she still thinks she’s a kitten. We have our suspicions about why she’s so “kittenish” at her age, but we really don’t know, other than she’s healthy and happy. And funny. Watch below:

We know that dogs like to chase their tails. Many of us have, or have at least seen, a cat that likes to chase its tail. Gizmo, in the video above, doesn’t chase her tail very much, but when she does, she goes after it for all she’s worth. Why do some cats chase their tails?

Cats chase their tails for a variety of reasons

Dr. Steven Zawistowski, a science adviser with the ASPCA, says that they turn around, or look over their shoulders, see their tails moving, and it’s like seeing prey. He says it’s a natural reaction to want to start chasing it. The tail is a small moving thing, and so they’ll spin around while trying to catch it, the same way they’ll chase small balls that go past them or around them.

Love Meow says it’s also possible that cats chase their tails because they see the motion, and it somehow annoys them. They go after the annoyance, and try to make it stop.

Other reasons cats chase their tails are boredom, seeking attention, and medical problems like skin allergies, fleas, or even impacted or infected anal glands, according to an article on Canidae. They could also have a neurological problem causing the behavior. A cat that’s compulsively chasing her tail might also suffer from feline hyperesthesia syndrome, which is a disorder that makes cats extremely sensitive to touch along their spines and tails. With this disorder, even their own fur can bother them. If you notice that your cat is chasing her tail frequently, and especially if it’s a new behavior, consider taking her to the vet to rule out medical problems.

In Gizmo’s case, this is kitten behavior, despite the fact that she’s now 14 years old. She doesn’t appear to have anything wrong with her tail that would make her chase it, she’s got no symptoms of anything else, and she doesn’t do it very often.