Cats love having places to hide, and that’s one reason they like boxes so much. Boxes also have unfamiliar smells and are an unfamiliar sight, so they’re new places for END_OF_DOCUMENT_TOKEN_TO_BE_REPLACED

Some of us have, or had, cats that we termed “pukers.” These cats are the cats that vomit a few times a week, and we can’t figure out why. Even our vets can’t find a problem: They can’t find blockages; bloodwork and urinalyses are normal, and there’s no evidence of tumors. They just say, “Yep! Looks like you’ve got a puker here.” Did you know, though, that regular vomiting in cats isn’t normal?

We have a cat that we once thought was just a puker. Aria would eat, and sometimes she’d vomit right after eating. Other times, she’d vomit up huge hairballs. She was vomiting several times a week and it was a problem. Our vet looked for everything she could think of, and came up with nothing. Aria seemed healthy. She was just a puker. 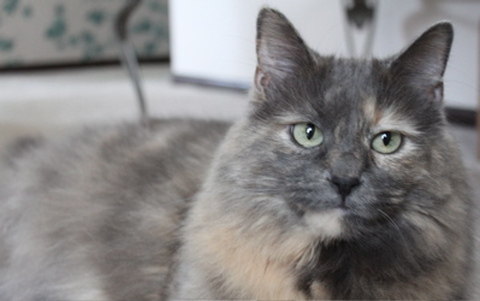 She wasn’t losing weight vomiting up all that food, and it didn’t seem to be hurting her any other way, but think about it like this for a moment: Is vomiting that often in the wild really feasible? Is it natural for an animal that has both predators and prey to vomit that much?

Frequent vomiting can be a sign of something serious

Obviously, frequent vomiting can mean something serious. The ASPCA lists these possible causes of frequent vomiting: Colitis, pancreatitis, liver failure, kidney failure, heartworm infection, blockages, and more, are all there. If the frequent vomiting is new, whether your cat has other symptoms as well or not, you should take her to the vet to find out what’s going on.

Regular vomiting in cats isn’t normal, either, though

According to an article on Catster, the American Veterinary Medical Association (AVMA) decided to research regular vomiting in cats by reviewing the cases of a number of cats that were considered pukers. They ran bloodwork, performed various kinds of imaging, and basically, did everything they could think of to find out what, if anything, was wrong with these cats.

Furthermore, despite the fact that many of of us have been conditioned to think that regular hairballs are normal, they aren’t, any more than regularly vomiting food is normal. Think about it this way: Cats are designed to swallow a lot of fur. They swallow their own fur all the time, and they will swallow the fur of their prey. Why would they be unable to pass that fur most of the time? 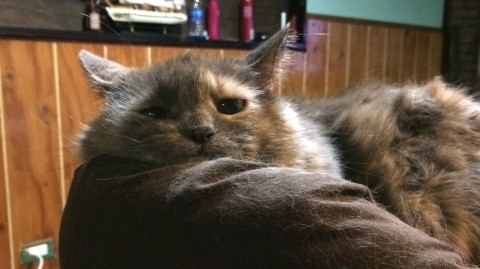 Can regular vomiting in cats be a dietary problem?

The problem for your puker cat may actually be her diet. Lower-quality foods often contain protein rendered from animal parts that are indigestible for humans, and difficult to digest for cats. This can cause regular vomiting in cats.

If your vet has determined this may be the case for your cat, try putting her on a higher quality food, with muscle meat as the main protein source. When you look at the ingredients list in cat food, you should see something like “chicken,” “poultry,” “beef,” etc., as the first ingredient. It should not contain “byproduct.” Find one of these foods, and see if that helps.

Another dietary problem that can cause regular vomiting in cats is food allergies. Rashes, sores and swelling are more common with food allergies, but they can cause vomiting, too. We believe this is what was happening with Aria, and that the grains in regular commercial cat food were the culprit. The reason is not just because she stopped vomiting regularly, but also that she used to suffer from occasional lip swelling, and it was a problem regardless of what bowls we used, what litter we used, basically anything. 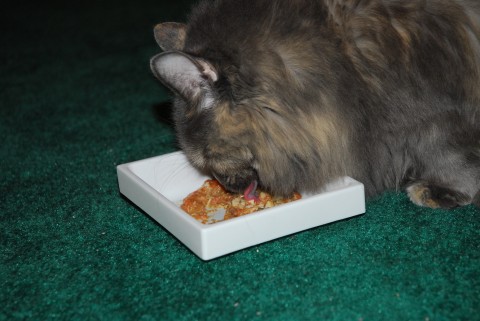 We have our cats on a homemade, raw food diet, but this isn’t the only way to stop regular vomiting in cats. It’s just how we did it; Aria now vomits maybe once every six weeks, or less. It’s still a lot more frequently than it should be, but that’s a vast improvement. Her lips also no longer swell up.

It is extremely important that you and your vet rule out medical causes of your cat’s vomiting before you start trying dietary changes to help her. Regular vomiting in cats isn’t normal, but isn’t necessarily dietary, either. It’s also a good idea to work with your vet on dietary changes, once medical problems are ruled out.

When we hide Chase’s food, we don’t just put it on shelves and chairs, and in out-of-the-way spots on the floor. We’ll also put it inside boxes, tubs, and even END_OF_DOCUMENT_TOKEN_TO_BE_REPLACED

This is Chase. He and Kali came to us by way of my sister, whose neighbor had found them alone and cold at probably 2 weeks of age. Nobody has END_OF_DOCUMENT_TOKEN_TO_BE_REPLACED

When it comes to cats, we might think their meows are their primary method of communication, and we’d be right, but cats only really meow at humans. They almost never END_OF_DOCUMENT_TOKEN_TO_BE_REPLACED

Enrichment is an important part of a cat’s life, particularly if that cat is an indoor-only cat. Some cats need more enrichment than others, and for those cats, you might END_OF_DOCUMENT_TOKEN_TO_BE_REPLACED

The rising cost of vet care is putting pets in danger. Most cat parents know that taking our furry feline friends to the vet for regular checkups is necessary for END_OF_DOCUMENT_TOKEN_TO_BE_REPLACED

Another look at Chase “gnawing” my knuckles. You can see his behavior here considerably better than in the last video. Like I said before, this doesn’t hurt, and he only END_OF_DOCUMENT_TOKEN_TO_BE_REPLACED

I probably have over a hundred Feline Commandments at this point, and I’ve only posted 30 or so. The rest are coming…in time. In the meantime, enjoy Volume 3 of END_OF_DOCUMENT_TOKEN_TO_BE_REPLACED