Tuxedo cats are gorgeous, cute, and fairly common. These beauties are black with white patches on their chests and stomachs, along with white boots or socks on their paws. The look resembles that of a black tuxedo with a white shirt, hence the name. They may also have white patches elsewhere, but not always. How do tuxedo cats get their coloring? 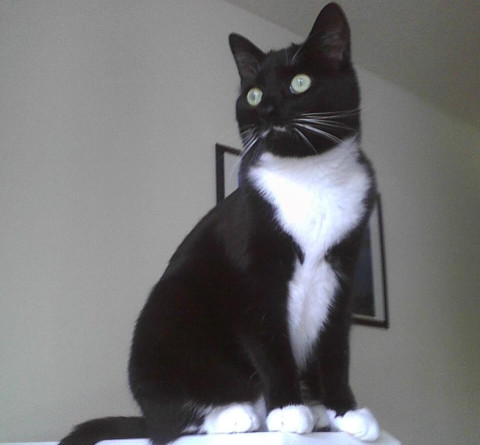 Image by Solarflarepixie. Licensed under CC BY-SA 3.0 via Wikimedia Commons

Piebald coloring, which is the word for tuxedo cats’ markings, and white patches on other animals as well, comes from a lack of pigment in those areas of the skin. For a long time, scientists thought that pigment cells moved too slowly across an animal’s body while it was still in the womb, which resulted in the white patches.

However, it’s actually that tuxedo cats and other animals don’t have enough pigment cells to cover their whole bodies. These cells fail to multiply, rather than fail to spread. That results in the white patches across tuxedo cats’ bodies. The cells originate along the spine while in development, and the white patches result when there aren’t enough cells to move across developing skin.

The study looked at mice embryos, and found that the pigment cells that did exist moved efficiently, and spread throughout the mice’s bodies. This discovery was quite a surprise because it’s in direct contradiction to previous schools of thought on piebald markings.

Are tuxedo cats a breed, is it just a description of their coloring?

Tuxedo cats aren’t a breed of cat – the pattern can exist in any breed, and in longhairs and shorthairs. They can be mixed breed or purebred, but the rarest of them actually have a black patch on their chests that resembles a bowtie, thus completing their tuxedo look.

Some others will have a little black mustache, giving them a debonair, “Clark Gable” look.

Tuxedo cats are adorable. I personally have never had the pleasure of having one – all the cats that have adopted me in adulthood had other markings, but I have friends with tuxedo cats and they are very cute.

These cats are also sometimes referred to as Jellicle cats, which is a reference to a T.S. Eliot poem, “The Song of the Jellicles.” He described those cats as black and white, which most likely refers to tuxedo cats.