You may have noticed that, when you pet or scratch your cat’s back, her butt goes up in the air. She might even lean way down on her front paws to get her butt higher in the air while you scratch. This usually happens when you scratch her lower back and down to the base of her tail. Why do cats raise their butts like that? 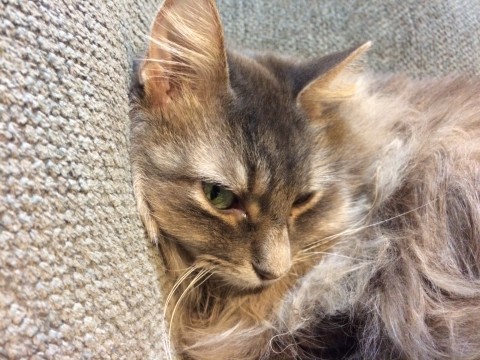 Cats raise their butts because they’re communicating something to you

All of our cats do this to some degree, but Aria and Kali do it the most. It turns out that cats raise their butts in the air because they’re inviting more scratching and petting. They’re telling you that they’re happy with what you’re doing, and they want more of it.

Cats don’t communicate the way we do. A butt in the face, or a raised butt, is a sign of friendliness, and even affection. Their body language says more than their meows ever can. When cats raise their butts, they’re signaling friendship, comfort and affection. A cat that isn’t doing this may still enjoy the petting, but perhaps not in that right spot, or maybe they’re just not feeling very affectionate at that time.

Kali will eventually settle all the way down, even though she still wants us to pet and scratch her. When this happens, her ears are forward, the pupils of her eyes are small, she’s still rubbing on our fingers, and she’s still purring. She’s just decided she wants scratches elsewhere at that time.

She also just gets up and leaves when she gets tired of the attention, so her settling down isn’t an indication that she’s getting restless. It’s probably not with your cat, either.

Aria just never stops with the butt-raising. This often makes it hard to brush her, because she’s got her forequarters so low, and her hindquarters so high, that it actually makes brushing her sides much harder.

They will also do it for other reasons

Another reason cats raise their butts is because it’s a holdover from when they were kittens. This is how kittens let their mothers know that their butts are ready for cleaning, and it’s possible that cats see us as surrogate mothers (I know Chase thinks I’m his mama).

Basically, cats raise their butts because they’re trying to tell us they’re happy and like what we’re doing. It’s a compliment, and a request for more.

One Reply to “Why do Cats Raise Their Butts in the Air?”