South Korea, like many countries around the world, has a stray cat problem. However, someone is working to take care of those cats living outdoors, though, and the entire world can see it. Cats Meok Bang is a livestream on YouTube that focuses on a feeding station where these cats can eat. It’s online 24/7 in South Korea, but the world can watch various clips from it. 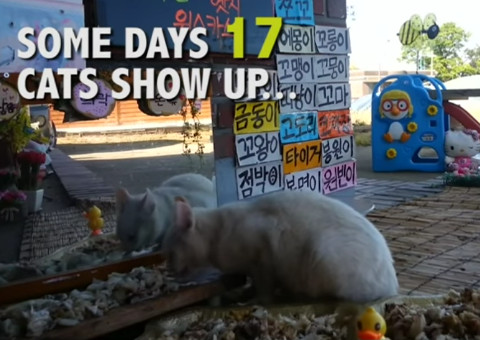 How did Cats Meok Bang get started?

Koo Eun-je started the whole thing almost accidentally, when he put some fish out for a stray cat living near his mother-in-law’s home. As more cats arrived, he began putting out more food and set up a station. He and his wife put a camera, which is how the livestream of the feeding station came into being.

They thought there might be one or two cats, but they’ve got 17 cats feeding at that station now, which was surprising to them. They’ve decorated the feeding station up like a tiny restaurant, with a chalkboard sign showing the day’s menu and everything. Watch a clip from it here:

Stray cats have a bad reputation in South Korea – often referred to as thieves, probably because they steal food (and possibly other things). Here in the U.S., we’re slowly evolving towards an understanding that these cats need to be cared for and sterilized, which helps them, us, and even wildlife.

Cats Meok Bang may well be the first baby step towards that same understanding in South Korea. Koo doesn’t just put leftovers out in the kitty restaurant, he actually goes out and fishes for them, so there’s always plenty of food. The channel itself now has 110,000 viewers each month, and that number is growing. Koo is a cat-man with a heart of gold for this.