So, there’s this cat on Instagram named Monkey, who could look like your run-of-the-mill, beautiful black cat if you couldn’t see his upper fangs. They’re so long Monkey looks like he could be a vampire cat – but fortunately, his killings are limited to leaves and various plants.

I only sort of have a vampire cat or two

We have two cats with long fangs, but not nearly as long as this vampire cat’s fangs. Monkey’s teeth extend so low that they’re easily visible, even when his mouth is as closed as he can make it. With Chase and Kali, you can see their fangs, but they’re shorter than Monkey’s so they’re harder to spot. 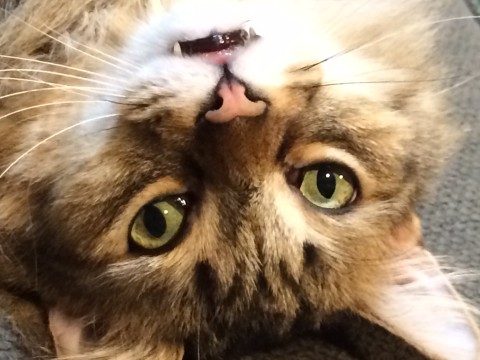 To be honest, I’m kind of jealous of Monkey’s person, Nicole Rienzi, here.

How did Rienzi come by this pretty vampire cat?

Rienzi was driving with her mother when Monkey, then a young kitten, ran in front of their car. She almost hit him, stopped, and got out to make sure he was okay. He was underweight, full of fleas, with both eyes infected and just all around filthy. Kittens that are alone in the world like that often are in this condition.

Vampire Cat Monkey didn’t yet have his vampire fangs yet, so Rienzi had no idea she had such a unique-looking cat. She was going to find him a home, but ended up keeping him because he was giving her something she needed, too. It took about a year for his vampire fangs to grow in.

At that point, she took him to the vet to make sure the long canines weren’t a problem. Thankfully, they aren’t. They’re just very long. Long enough to suck blood, but Monkey only carries leaves and things around, since cats can’t suck blood.

Monkey has more than 24,000 followers on Instagram, and his “vampire cat” photos regularly get thousands of likes. Some of the photos are quite artistic, and others are Monkey just being a cat.