What is up with cats and cucumbers? Videos have been making the rounds of the Internet, showing cats that get freaked out by strategically placed cucumbers. They don’t smell especially strong, and they’re not exactly big and towering, and yet, when cats see them, they freak. What on earth is going on? 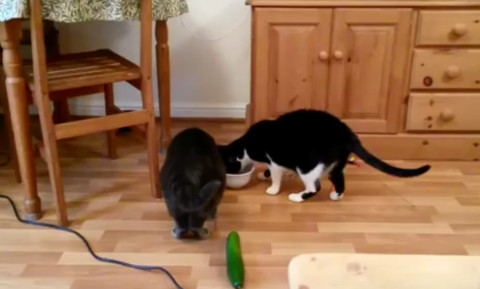 Cats and cucumbers is like cats and circles made of tape

It’s like the cat circles phenomenon, where people would try to “trap” their cats inside circles made of tape, ribbon, rope, or anything else cats could step over easily. It doesn’t work with all cats, but it does work with enough that it became an Internet phenomenon. Cats and cucumbers is very much like this; many cats react, but some don’t. Watch the compilation below to see the ways that some cats react to cucumbers.

This brings up the main question: What is it about cucumbers that’s so scary?

There are a few theories, one of which has to do with a possible resemblance to snakes. Seeing a cucumber appear behind them might trigger some sort of reflex to avoid snakes. It’s also possible that the cucumber is an object that just magically appeared, from the cat’s perspective, and that alone is enough to startle cats.

This is such a popular phenomenon that there’s even an entire subReddit devoted to it. It comes complete with a disclaimer that, sadly, applies to us and our cats: “This is /r/CucumbersScaringCats, not /r/CucumbersNOTScaringCats. If the cat isn’t scared, it doesn’t belong here.” Maybe some have tried to prove there that cats and cucumbers aren’t always a thing? 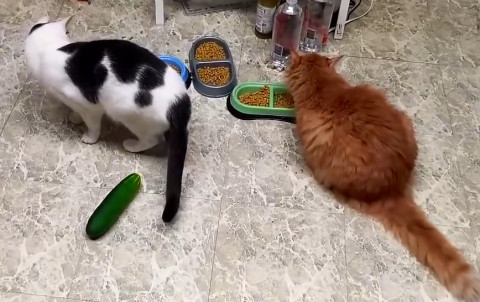 Cats and cucumbers are hilarious, but this is not necessarily a good thing

However, it’s not a good thing that this is taking the Internet by storm. National Geographic ran an article about this, which went after people who were intentionally scaring their cats with cucumbers. Jill Goldman, a behaviorist in Southern California, says that if you’re causing your cats stress this way, then it’s probably not a good thing no matter how funny it seems.

One of the problems is that people are putting the cucumbers behind their cats while they’re eating. Cats associate their feeding stations with safety and security, according to the National Geographic piece, and people are intentionally scaring their cats in those places. That’s cruel, and could potentially cause behavior problems.

So, while cats and cucumbers take the Internet by storm, beware of doing this to your cats. Cats’ fear reactions can be funny, but in the end, are not really worth it. You want them to feel as safe as possible.

One Reply to “Cats and Cucumbers: WHAT is the Story?”